Fogo Island Film: Resistance and Resilience is an annual series devoted to international films that consider the diversity of relationships between nature and society. For the first time this year, the program includes a competition for short films and culminates in two Fogo Island Film Weekends on Fogo Island and in St. John’s featuring highlights from the 2019 series, invited guests in conversation, educational programs and thematic workshops. 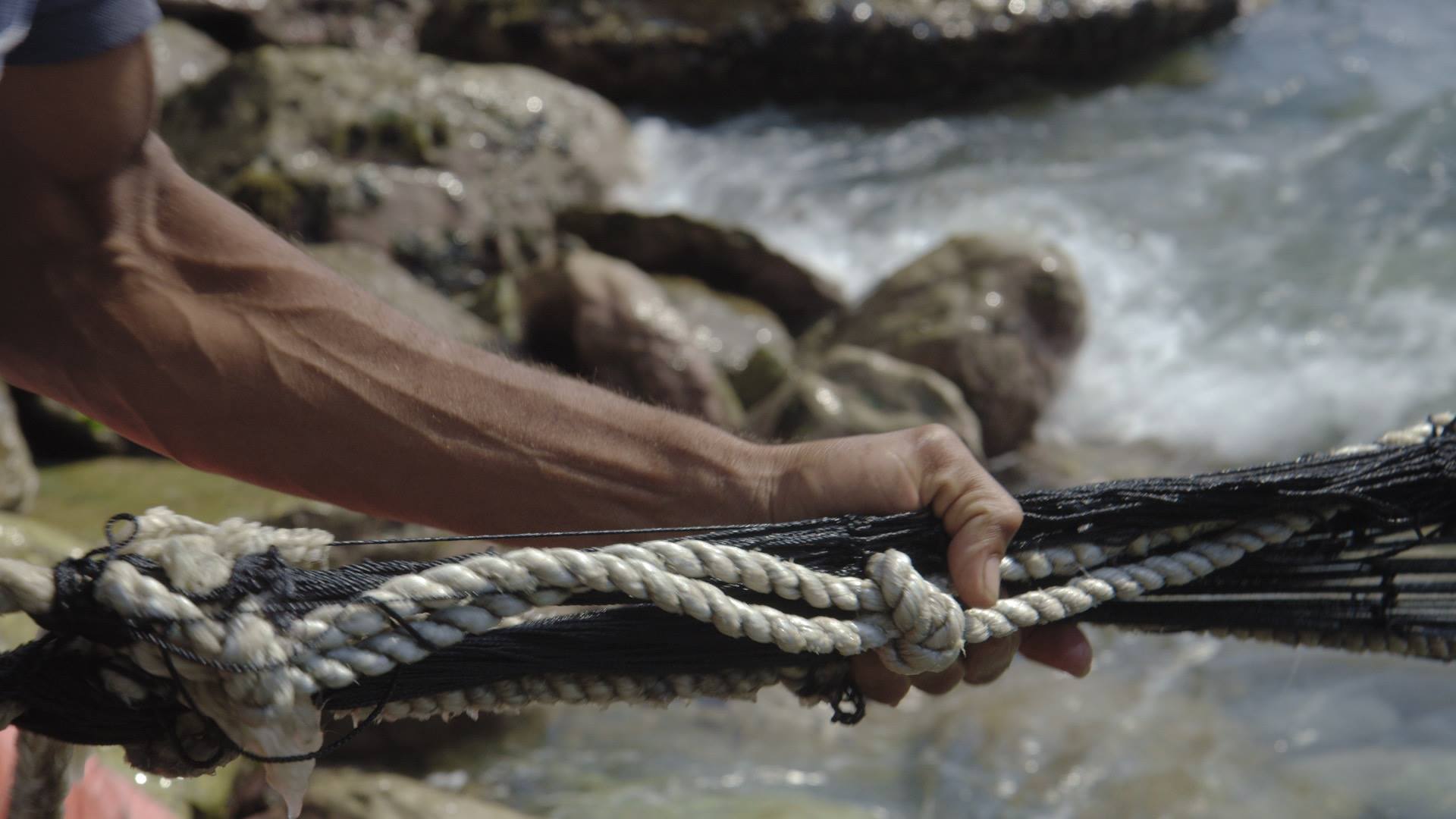 La Pesca portrays a day in the life of a family of fishermen in Colombia. With poetry and sensorial richness, the film captures the gestures of these men as they weave nets, cook, and play dominoes, all
the while waiting for the fish to come so they can commence anew. 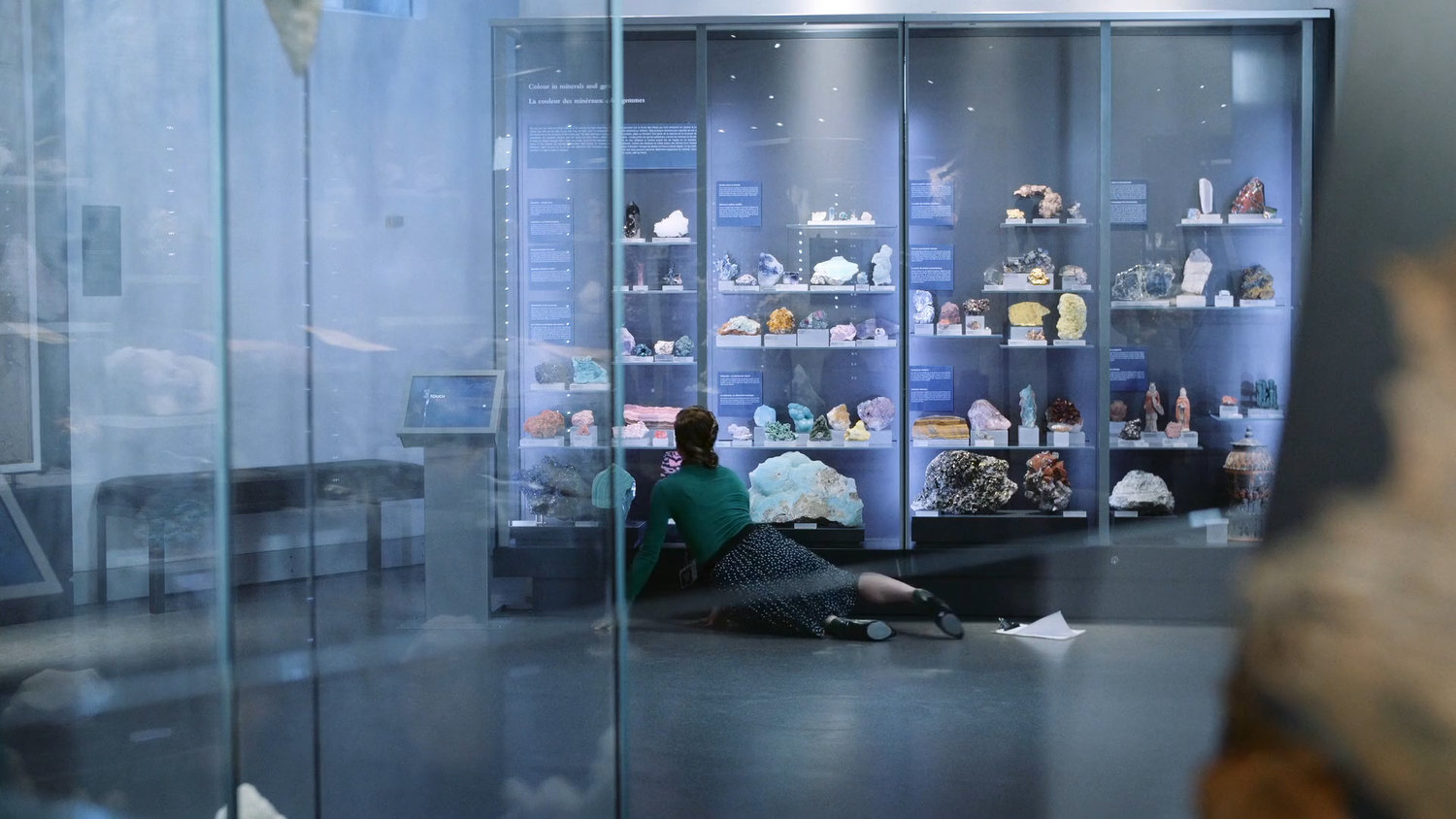 In Gems and Minerals, museum guides discuss the hidden worlds of rock and mineral specimens in the Teck Suite: Earth’s Treasures galleries at the Royal Ontario Museum, Toronto. With expressive performances in American Sign Language (ASL) and site-responsive dance, the performers use their bodies to enact the origins of the earth’s oldest materials, surprising quirks of chemistry and geology, and tell fantastical stories—about the hydro-geologist who keeps accidentally swallowing pearls, the guard who relieves his arthritis against the copper exhibit, the silver ore that attracts bats, and the asteroid on an ominous trajectory toward our future descendants. Amid the emotional, sometimes comical gesturing in the busy public gallery, performers also embody some of the most controversial and disturbing social, environmental, and economic impacts of mining. They evoke the untold stories of violence produced by the global corporations that extract geological resources and specimens, and sponsor museum exhibitions. A tree is like a man / En la maloca de Don William is an attempt to touch the other world through its edges. Filmmaker Thorbjorg Jonsdottir met ayahuasquero Don William by chance in the year 2000 while traveling in the Colombian Amazon. This encounter led to a collaboration that developed over a decade between the filmmaker and the shaman. Shot on 16mm, the film serves as personal witness to Don William’s lifetime relationship to ayahuasca and other plant medicines that are native to the jungle. With the rainforest a rich labyrinthine background, this portrait is at once intimate and spare, opening up to alternate realities as dense as the jungle itself, with kaleidoscopic multiplicities in both the natural and spiritual realms. 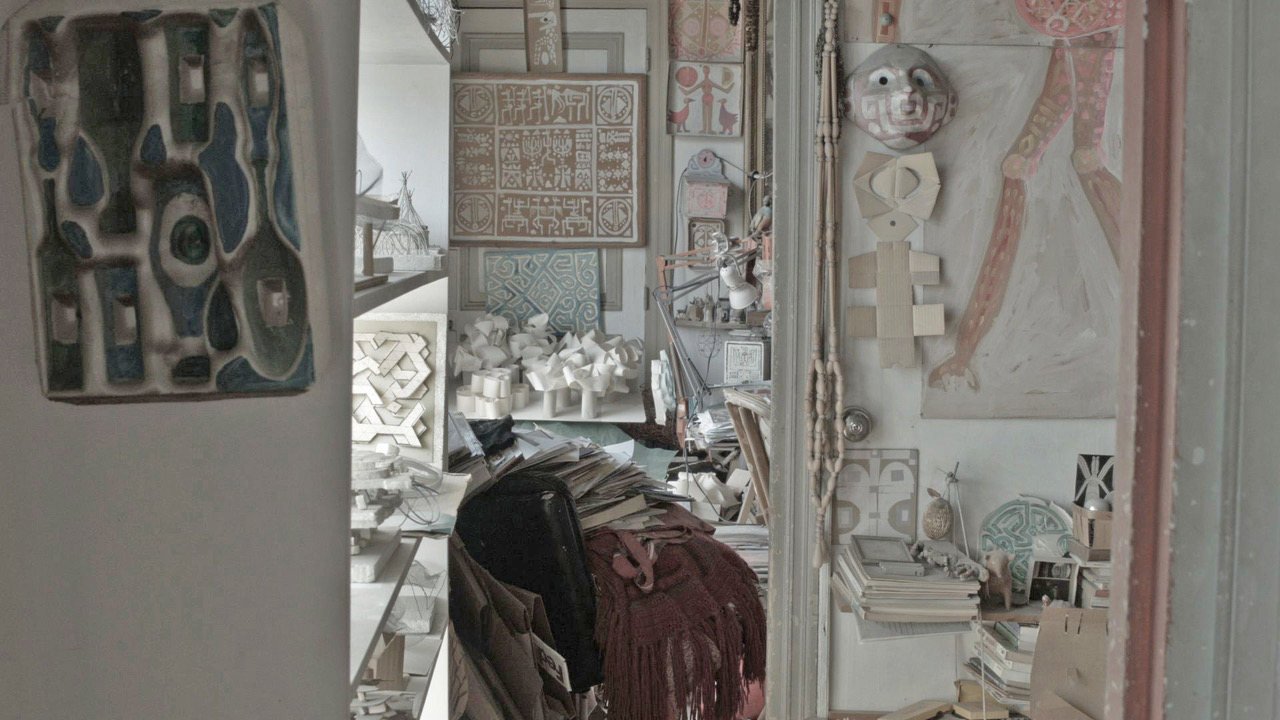 In 60 Elephants. Episodes of a Theory, Michael Klein and Sasha Pirker portray the thoughts and work of Yona Friedman, a 95-year-old French architect and humanist who was awarded the Friedrich Kiesler prize in 2018. Friedman developed visions of an improvisation-capable, mobile architecture for a migrating global society as early as the 1950s and 1960s. His remarks on the current refugee issue, which are presented in the film, reveal his considerate and calm way of thinking oriented to social needs and their sensible fulfillment. Friedman´s rural and urban living and working spaces are presented in insightful passages accompanied by his own voice from off-screen, providing a red line through the film. In the basement of the Horniman Museum in London a team of marine biologists and aquarists led by Jamie Craggs have initiated Project Coral, a pioneering endeavour to breed corals in captivity. By mirroring the environmental circumstances—seasonal temperature changes, solar irradiance and lunar cycles—of the Great Barrier Reef within specially designed tanks, the team has become the first in the world to successfully spawn corals in a laboratory. For the Love of Corals is a cinematic inquiry that focuses on the daily labour of caring for endangered beings to resuscitate them from their imminent human-induced extinction. While keeping the coral in captivity is, dishearteningly, the fundamental condition of Craggs’ research, the scientists and the coral also become entangled in sharing a space for living, working and world-making, expanding the range of possible worlds in common. A man spends his days fighting a gritty battle against an invasion. The invasion is that of certain non-indigenous plants that begin to take hold and spread across the mountainside of the Cape Peninsula in South Africa. The battle is Sisyphean and has grown into an obsession in the heart of the man. His battle strategies and internal philosophies collide, and the plants begin to find their voices in his interior world, invading his dreams. In South Africa we call these plants Aliens. Some of us call ourselves aliens too. 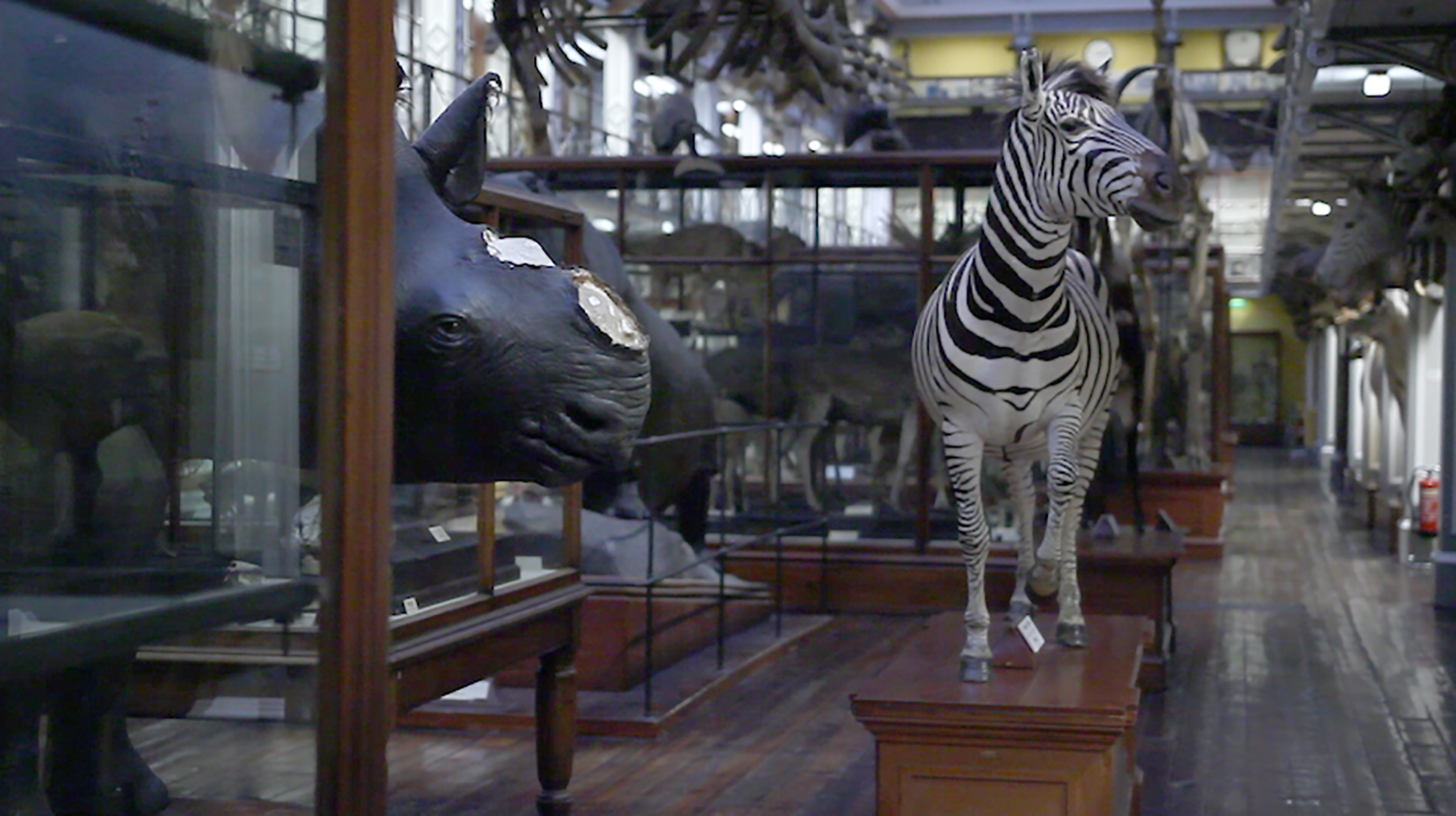 A Poetic Truth in a Pathetic Fallacy considers ways in which humankind has been fascinated by and has misinterpreted the rhinoceros, exploring the urgency to keep this genus from extinction while considering the lingering effects of colonialism and collection. Rhinoceros horns were traditionally used in Eastern medicine, and although scientists have concluded that they have no health benefit, this has not dissuaded the market, and the value of the horn has risen due to its newfound status as a luxury good. In South Africa today, the lingering effects of colonialism and apartheid are at the root of poaching. In the male-dominated industry of wildlife protection, the Black Mambas (all female) Anti-Poaching Unit have gained international recognition for their efforts. Although beloved by the media, the Mambas risk their lives and struggle to support their families while protecting the wildlife that serves the financial interests of white landowners and foreign tourists.

Eulogy for the Dead Sea is a short documentary chronicling the rapid shrinking of the Dead Sea, a unique biosphere bordering Jordan, Palestine’s West Bank and Israel, which has fallen victim to regional conflict and severe environmental degradation. Through meditative vignettes of existing and abandoned infrastructure marking the lake’s former shores, and a polyphony of views and voices from across all shores, the film searches for ways of transforming collective grief into international cooperation.

The Fogo Island Film Weekends are presented in partnership with the National Film Board of Canada (NFB), The Rooms, and the Newfoundland and Labrador Film Development Corporation (NLFDC). Detailed program to be announced.

Fogo Island Film is dedicated to contemporary artistic and scientific debate that addresses nature and culture as an indivisible whole. Broaching themes of environmental degradation, the interconnectedness of species, geopolitical migration, the commodification of nature, Indigenous perspectives, social activism, as well as lives lived in deep connection with the natural world, the films question or condemn our actions, offer alternative perspectives and occasionally, suggest hope for a brighter future. Fogo Island Film: Resistance and Resilience features 10 screenings and special events held throughout the year at the Fogo Island Inn Cinema, and is curated by researcher and theorist Goran Petrović Lotina and FIA Director of Programs and Exhibitions Alexandra McIntosh.