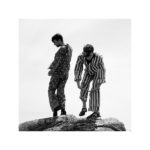 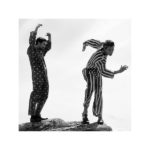 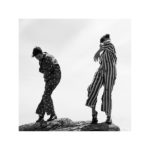 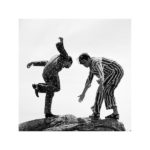 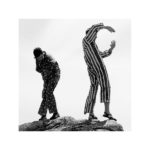 Zin Taylor’s photographic and video work, Lichen Voices (2013) derives from the time he spent on Fogo Island during a two-part residency with Fogo Island Arts in 2010 and 2012. The Lichen Voices photographic series presents two men throwing poses while dressed in stripe and dot pajamas. Manifestations of the Taylor’s ongoing work with an artistic vocabulary of stripes and dots, the two figures suggest an overlay of culture (straight lines and perfect circles; patterning and abstracted repetition) superimposed on a background of the lichen-clad rock formations so ubiquitous on Fogo Island. Instead of dominating the landscape, however, the artist sees his cultural avatars as controlled by the lichen, hence the work’s title: Lichen Voices. With these works, Taylor intuits something of the drama of life lived in a remote location like Fogo Island.

Zin Taylor—The Story of Stripes and Dots was presented at the Fogo Island Gallery from September 27, 2013 to March 23, 2014 and is the subject of the volume Zin Taylor: Lichen Voices/Stripes and Dots (2013) in FIA’s publication series.

The artist also collaborated with designer and maker Jeremy Laing to create Stripes and Dots pyjamas.

For information and to purchase an edition, please contact us at [email protected].