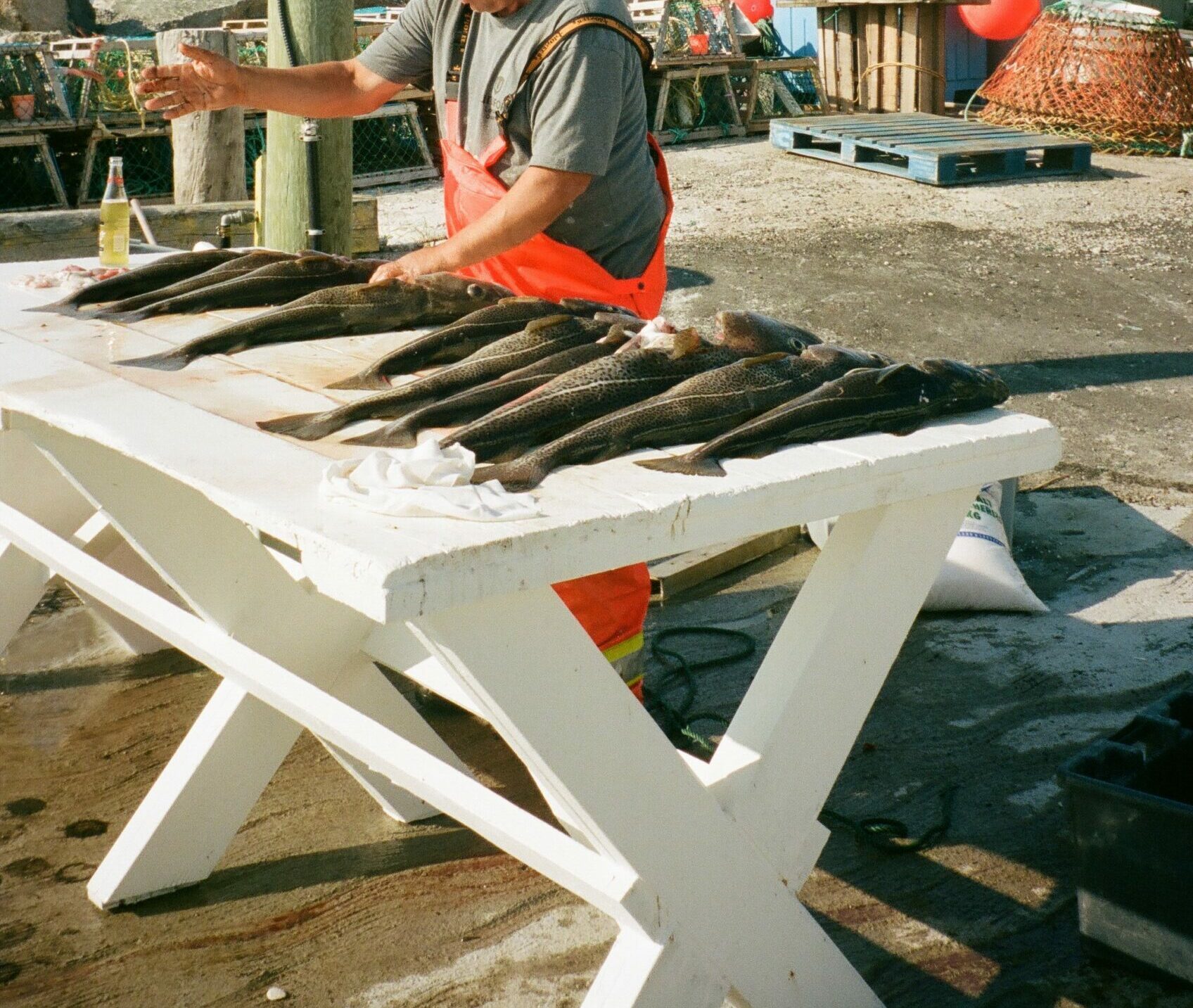 FIA is delighted to announce that Marta Arzak, Cooking Sections, L. Sasha Gora, Taus Makhacheva and Fadzai Veronica Muchemwa have been selected as the recipients of inaugural Labrador Current Foodways residency. The Labrador Current Foodways residency explores the interconnectedness of food with our histories, ecologies, economies, politics and social worlds. Fogo Island is geographically located within the Labrador Current, a section of the Atlantic being monitored closely by scientists as an indicator of climate change, but also, one which has implications for the whole Atlantic region.

The residency is intended to provide a unique set of experiences that the resident will be able to incorporate meaningfully into a new or existing project or body of research. Residents will be invited to work closely with Chef Timothy Charles, a founding member of the Kitchen team at Fogo Island Inn who believes in tapping into our heritage to create a better future, and who loves working with the vast natural larder at the Inn’s doorstep.

Marta Arzak is a freelance curator specialised in food and interested in exploring the links between art, food, and cooking. She is also art adviser at Restaurant Arzak in San Sebastián. Marta collaborated with chef Ferran Adrià’s and elBulli’s project for documenta12 (2007) , curated the exhibition Frying Water in Espacio Marzana in Bilbao (2008) and Fundación Pilar i Joan Miró in Palma de Mallorca (2010) – which aimed to metaphorically provide insight into how chefs do culinary research –, and took part in the residency program The Politics of Food at Delfina Foundation in London (2015) conducting research on and curating the event On Commensality: The Act of Eating Together. Crisis or Transformation? She has organised and participated in diverse education and public programs focused on art and food and has published several texts on such topic.

Marta studied Art History at the Universidad Autónoma de Madrid and she is Associate Director of Digital Education at Guggenheim Museum Bilbao.

Cooking Sections examines the systems that organise the world through food. Using site-responsive installation, performance and video, they explore the overlapping boundaries between art, architecture, ecology and geopolitics. Established in London in 2013 by Daniel Fernández Pascual and Alon Schwabe, their practice uses food as a lens and a tool to observe landscapes in transformation. They have worked on multiple iterations of the long-term site-responsive CLIMAVORE project since 2015, exploring how to eat as humans change climates. In 2016 they opened The Empire Remains Shop.

Their work has been exhibited at Tate Britain, Serpentine Galleries, SALT, Bonniers Konsthall, Lafayette Anticipations, Grand Union, Atlas Arts, HKW, Storefront for Art and Architecture; the Taipei Biennial, 58th Venice Biennale, Shanghai Biennial, Los Angeles Public Art Triennial, Sharjah Architecture Triennial, Sharjah Art Biennial, Performa17, Manifesta12, and New Orleans Triennial among others. They have been residents at Headlands Center for the Arts, California; and The Politics of Food at Delfina Foundation, London. They are part of British Art Show 9. They lead a studio unit at the Royal College of Art, London, and were guest professors at the Academy of Fine Arts, Munich.

L. Sasha Gora is a writer and cultural historian with a focus on food studies, contemporary art, and the environmental humanities. She holds a PhD from Ludwig Maximilian University of Munich. Her dissertation chronicled the history of Indigenous restaurants in the lands known as Canada, and received the 2021 Bavarian American Academy Dissertation Award. She has been a visiting scholar at the University of California Berkeley and a postdoctoral research fellow at Ca’ Foscari University of Venice. She is currently a lecturer at the Rachel Carson Center, Munich, and in autumn 2022 will be joining the Delfina Foundation’s The Politics of Food programme in London as a resident and the Institute for Advanced Study in the Humanities, Essen, as an international fellow.

Spotlighting seafood, her current research is about culinary reactions to climate change. She has given talks at Haus der Kulturen der Welt, Berlin, the Centre for Contemporary Art, Glasgow, Ocean Space, Venice, and elsewhere. Her writing has been featured by publications such as Gastronomica, C Magazine, Arts of the Working Class, VICE, The Preserve Journal, and Eaten. Her first book—Culinary Claims—is forthcoming.

Taus Makhacheva (b. 1983 Moscow) creates works that explore the restless connections between historical narratives and fictions of cultural authenticity. Often humorous, her art considers the resilience of images, objects and bodies emerging out of stories and personal experiences.

Fadzai Veronica Muchemwa is a researcher, writer and curator currently operating between Harare, Zimbabwe and Makhanda, South Africa. Her research explores notions of care in artistic practice, national archival records, social justice, histories of cities, topographies of knowledge production and sites of transition. She is currently working on two ongoing projects: Harare/Insomnia and The Oxymoronic Tea Party. She was Curator for Education and Public Programming at the National Gallery of Zimbabwe from 2017 to 2020 and Assistant Curator from 2016-2017, where she co-curated Moulding a Nation: The History of the Ceramics Collection of the National Gallery of Zimbabwe (2018–2019), Dis(colour)ed Margins (2017), Culture in Communities (2016), and Jazzified: Expressions of Protest (2016). In addition, she curated The Unseen: Creatures of Myth and Legend, an exhibition of artworks by Isaac Kalambata at the Lusaka National Museum in 2018. As visiting curator at the Bag Factory in Johannesburg in 2019, she produced the publication curating Johannesburg: rest.less, under siege/in transition. In 2021 she curated the exhibition If you think about it, just midding in the meantime or Progression for KKNK virtual Gallery, which was nominated for the Kyknet’s Fiesta awards. She recently curated a group show: I did not leave a sign? for Zimbabwe’s National Participation at the 59th La Biennale di Venezia. Muchemwa is a 2017 fellow of the ITP at the British Museum and the Arts of Africa and the Global Souths program at Rhodes University, South Africa. She collaborates for Independent Curators International and is a founding member of the Practice Theory Collective.